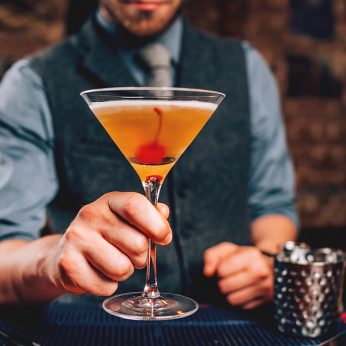 5 Classic Cocktails Every Gentleman Should Master

Surely we are past assigning gender to drinks and cocktails, there are as many pint-of-bitter swilling ladies as there are men who love a sweet, fruity cocktail.

However, no self-respecting gentleman wants to be seen holding a Pina Colada but wants something a little more sophisticated, so we have five classic whiskey drinks that every gentleman should know how to make.

This drink is so iconic it even has a glass named after it. It originally made an appearance in the early 1800s and resurfaced in the 1860s when the mixture of bourbon, bitters, water and a sugar cube was en vogue. By the 1930s, it was the fashion to garnish it with a slice of orange.

The Sazerac was originally made with Sazerac de Forge et Fils cognac, though over the years rye came to be the main ingredient. It has been popular with New Orleans revellers since 1850, mixing rye, absinthe (or Herbsaint), honey, bitters, and a sugar cube to form the legendary drink, garnished with lemon peel.

The base for this standard classic is rye or bourbon, as is said to have been invented in the 1870s at the Manhattan Club in New York City. Sweet vermouth and angostura bitters accompany the whiskey in a cocktail glass, along with a lone Maraschino cherry.

More sweet and tangy than sour, this cocktail is a mix of lemon juice, sugar, and whiskey, and often with the use of egg white to add a creamy, frothy head.

Named after the monthly magazine from American writer Erskine Gwynne, it was invented in a bar he frequented in Paris. It is often mistaken for the Negroni, as both share sweet red vermouth and Italian apéritif as ingredients. But it’s whiskey, not gin, that sets this one apart.

Why not visit our Covent Garden cocktail bar to see which drink suits your gentlemanly style.