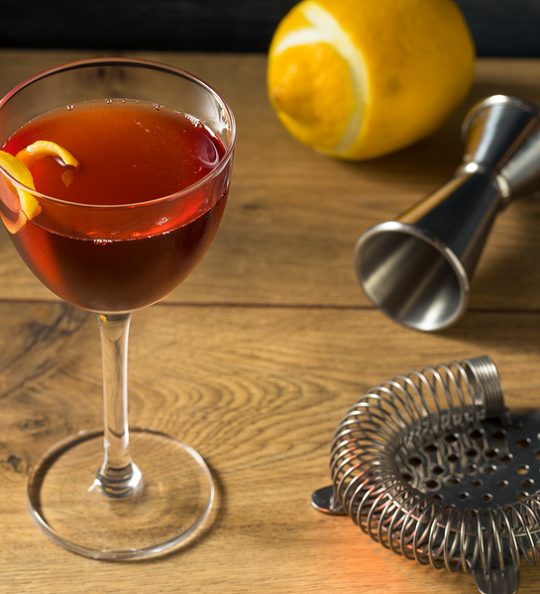 What Is Rye Whiskey?

You may have seen it on the shelves in bars and supermarkets, but what it rye whiskey? Well, the begin with, and to complicate things, there are two main types of rye. Essentially, rye is a grain from which some whiskies are made from. American rye whiskey, which is not dissimilar to bourbon, is made with a minimum 51 per cent rye.

Canadian whiskey can be labelled as rye for historical reasons, but may not actually contain any rye. There many other countries that produce rye whiskey, and usually will state that they are made with rye grain.

With rye whiskey making a bit of a resurgence with mixologists, we wanted to take a slightly deeper dive into the amber spirit.

American rye whiskey, as well as its 51 per cent rye, is also made with corn, barley and wheat. When distilled it must be no more than 80 per cent alcohol by volume (ABV) and stored in barrels at no higher than 62.5 per cent ABV. It’s then aged for a minimum of two years, and must not be blended with other spirits.

In Canada, despite rye not actually having to be used, the whiskey must have a character that is historically associated with Canadian whiskey, and rye characteristics are included in that flavour profile. Canadian whiskies are generally blended to achieve the rye character trait.

Canadian whiskey has a few more rules: They cannot use barrels larger than 700 litres and the liquid must be aged for a minimum of three years, like Scotch. Unlike Bourbon (but again, like Scotch), the barrels can be new or used.

What is the taste profile of rye in whiskey?

Rye whiskey can taste significantly different from other whiskies. Rye is often more spicy and peppery in flavour. In comparison, bourbon distilled from 51 per cent corn tends to be sweeter and more full-bodied.

Historically, rye whiskey was used more in the past and in fact, many bartenders are returning to rye in cocktails as it creates a dryer style, especially in a Whiskey Sours, Manhattans or Old Fashioneds.

Why not visit our Covent Garden cocktail bars to try a rye whiskey cocktail for yourself!